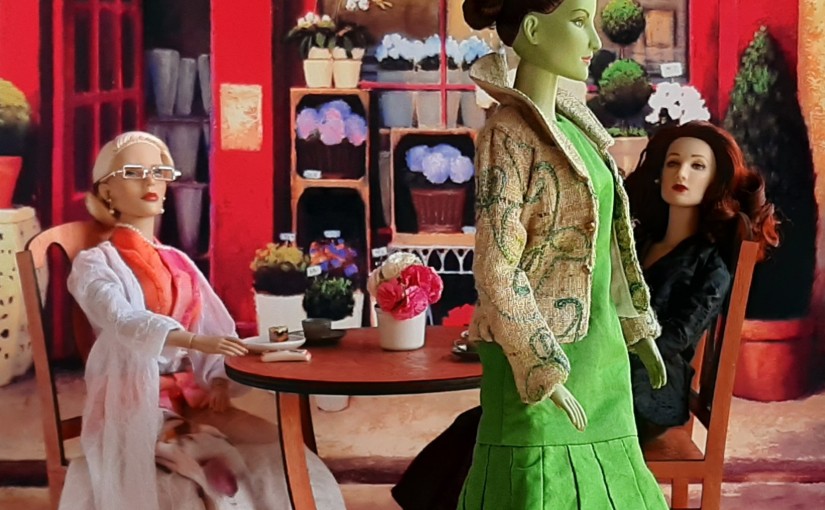 FOR ALL THE “GREEN” AND “BLUE” PEOPLE IN THE WORLD! (And as a homage to our favorite frog!)

It´s always awkward, if you have to talk with the boss about your salary… “Giving you a raise? What do you think! Your job performance wasn´t nearly good enough for anything like that! To be honest, you´re not qualified for 25 bucks and if you don´t work hard on this qualification, I don´t think, we can prolongate your contract!” And so she goes… “Have you seen that! He did it again! Why is he treating her like this? And why was he lying? She´s one of our best employees!” “Haven´t you heard? He´s a “green-hater”! Since he took over, he´s trying to get rid of her, just because of her green skin!”

“Nothing in life is fair! And if we don´t go back to work now, he´ll think about our contracts too!

But even the worst working day comes finally to an end and you can go home…But that doesn´t mean, you can escape! It´s everywhere… “Say, have you seen that strange woman? She was TOTALLY GREEN!”

“Witches are green? I thought the Martians were!”

“No. They´re blue. Witches are green!” “I don´t want to be an ugly green witch! Not for a million!”

To overhear such a conversation, gives you another good reason to hide somewere…But where can a witch go to? Yes, of course: THE PARK!

So she sits there, in this quiet and calming place, where everything is green like her and no one´s around… “It´s not that easy bein´green…” “Having to spend each day the colors of the leaves…” “When I think it could be nicer, bein´red or yellow or gold…Or something much more colorful like that!” “It´s not easy bein´green…It seems you blend in with so many other ordinary things.

And people tend to pass you over, cause you´re not standig out, like flashy sparkles in the water – Or stars in the sky!” “But green is the color of spring! And green can be cool and friendly like!” “But why wonder? Why wonder?” “I´m green and it´ll do fine…It´s beautiful. And I think it´s what I want to be!”

…But that´s not the end of the story! Sometimes, life holds a surprise for you… Suddenly, there is someone, who feels the same! “It´s not that easy bein´blue, having to spend each day the color of the sky….” So finally, our little green witch has found a  friend!

I had the idea for this “play” more than two years ago. But never had the time to bring it on my stage. And now, it seems to be more up-to-date then ever!

Edward had a hard time, playing the “villain”. He told me, being a vamire-impersonator was difficult enough and he expects me, to give him more positive parts in my next plays…We´ll see!

Another problem were the witch´s stained legs. I tried to cover the staining with pantys, but it´s still visible a bit.

It was also not easy, to work with the narrow back drops….I wanted to have two tables with dolls in front of the flower shop, but there wasn´t enough space.

And yes, it´s a bit strange to see dolls sitting on a café table, eating cake with a flower shop as a background…But the shop always reminds me a bit on a traditional café in Paris and as long, as I don´t have a real matching back drop…