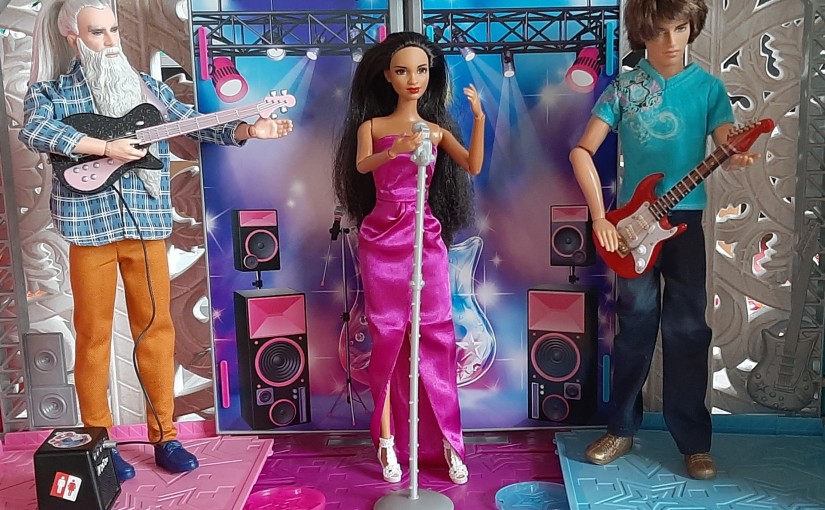 This time, it´s all about love in different ways, music, caring for others and how a life can suddenly be changed…Curtains up! Hi…This is a story about finding love in the middle of COVID…Actually, it´s MY story…

A few years ago, my grandma died and I inherited her little Italian restaurant. I grew up as a child there and always loved that place.

I´d worked as a sound engineer before, but I was never really happy with that, so I didn´t think twice and became a restaurant owner!

My employes and I were like family and we had lots of regular customers…then COVID came and my little place was closed.

I had to dismiss my employes. But my family owns the house, where the restaurant is located. So there is hope for me, to re-open as soon as possible and get my staff back  But I needed money right now. The only chance was, to go back to my former profession.  Luckily, a friend gave me an part-time job at his sound studio.

He´d usually worked with professional musicians, but COVID destroyed that business too. So he had the idea, to make recordings for anyone, who wants. The idea wasn´t new. In the 1950´s, there were lots of small recording studios like that.

I couldn´t earn much this way, but I was glad for every penny, I could grab.

First I hated my new job. Most of the people, who came in, had no talent but were convinced, that they could be superstars one day.  Others were just totally weird.

I remember one good example for the “weird ones”: One day, this strange woman came in…She wore an ugly, cheep evening gown and a fake fur.

Hear her singing, was torture. Of all songs, she had chosen “My heart will go on” from “Titanic”…It was like listening to a wolf howling under the moon! And afterwards, she dramatically collapsed on the couch in our lounge corner…I didn´t know, what to do…Call a doctor? But thank goodness, she recovered fast and left. A few weeks later, a mother came with her young daughter. She was convinced, that her girl had an amazing talent and she would do everything, to push her career. She was the very demanding type! I looked at the girl, and found, she wasn´t that enthusiastic. Actually, she seemed to feel very awkward.

But her mother almost pushed her on the little performing stage…. The girl had a good voice, but not good enough, to become a professional singer. And she knew it. She felt more and more embarrassed, while her mother watched her. Aterwards, before she went back to the lounge, she told me, that she hates the clothes, her mom made her wear. She felt like a cheap Barbie doll in that mini skirt and that she doesn´t want to be a singer, but go to the university and become an engineer. All I could do, was to wish her “good luck”!

Weeks went by and I still felt unhappy, working at the sound studio. I hated to see all those people with their hopes and dreams, knowing, they would never come true! But then, one day, I started to change my mind.

It was the day, when this fire fighter came in…She came straight from her shift and didn´t even have time to change. So she was still in her uniform, when she performed a few gospel songs. She told me, the songs were meant for a colleague and friend of hers, that got severely injured during a mission and fell into a coma . They used to go to a church choir together and she performed his favorites songs, so his family could play them at the hospital.

She looked so sad, when she left, it made me uneasy. And I began to understand, that my work wasn´t that senseless after all…At least sometimes. But not every recording was so sad…One day, I had twin sisters, both very “sporty”. They had lost a bet among friends and so they were forced to sing…. They gave a very funny performance! It was easy for my, to applaud. I had to repeat the recording twice, because the girls laughed much more, then they sang. Soon after, a guy came in. Besides his daytime job, he did drag in a little club before COVID came. I expected him to sing something saucy, but he chose a tender love song. He told me afterwards, the song was for his husband who catched COVID and was still in hospital. The husband almost lost his life, but was recovering. But still no visits allowed, so recording a song  and hand it over to the nurses, was a way, to show his love from a distance.

And I remember that old man so well…He came, to record a song for his wife, for their 60th wedding anniversary. I wanted to give him a chair, to make performing on the stage a bit more comfortable, but he just smiled and refused.

He had a rough voice, but full of emotions.

He said, he doesn´t know, how much time he still had and he wanted his wife to have something to remember, when he´s gone. And then…one day, I just came back from lunch,  there was this girl, waiting in the lounge…. She looked so shy and fragile. And when I started talking to her, she jumped up and appologized for being here!  She was so nervous, I thought, she would run off. So I tried to calm her down. She said, she didn´t have a good voice and appologized again. I convinced her to try. And when she finally entered the stage and took off her mask, I thought, how beautiful she was.

Than she started singing. First craven, then more self-confident. Her voice was soft and low, but also strong. I felt, like I never heard something like that before. And then, I had a strange vision…I saw that girl performing on a big stage in front of thousands of people. And suddenly, I was her only audience and she was singing just for me! I woke up from my dream, when she went silent. I had totally forgotten, to push the right buttons to record her performance. So I stuttered something about “technical problems” and begged her, to start singing again.

She might have took me for a fool, but she said nothing and repeated her song. And while I was busy, to do it right this time, I hoped, that the song wasn´t meant for her lover. I was strangely relieved, when she told me, it was for her mom´s birthday….

It took all my courage, to not just let her go, but ask her, from my usual “6 feet away”, if I could see her again…Maybe for a walk along the river or in the park, with a distance of course…Or just a chat on zoom…My heart sounded like a drum, while I spoke.

And then she reached out her hand in my direction and simply said “Yes!”

I still dream about going back to my grandma´s restaurant and start all over again. I want to show this girl my world and maybe, one day we will both be there, smilling and happy, when this is all over. But if I hadn´t start this job at the studio, I never would have met her….

Ok…It´s a very long story this time, but I had so many ideas for it.

The last scene with the “lovers to be”, keeping their social distance, was inspired by the famous novel “wifes and daughters” by Elizabeth Gaskell.

the book ends with the two lovers meeting, before the young man leaves for a long journey. He proposes to the heroine, and is accepted,  but isn´t allowed to come close to her, because one of his family members suffers from an infectious illness…..

It was fun to play with the sound studio and the stage. Both are from some years ago. I bought them second hand and now they´re belonging to my overflowing prop-chamber. They were actually meant for children to play, but very useful for me too….Isn´t there a child in everyone of us?